EXTRA! EXTRA! READ ALL ABOUT IT! An extra special post is coming out today, May 11th, for an extra special author. The man who started to ball rolling for FIRST, Chris Well, has a new book out and we have decided to give him an extra plug.

So, give all your attention to:

Chris Well is founder of FIRST. He is an acclaimed novelist and awardwinning magazine editor and has previously written the laughoutloud Christian thrillers Deliver Us from Evelyn and Forgiving Solomon Long(one of Booklists Top 10 Christian Novels of 2005). He has also contributed to 7ball, Infuze, and Alfred Hitchcocks Mystery Magazine. Chris and his wife live in Tennessee, where he is hard at work on his next novel. 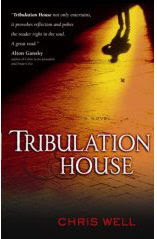 I might as well just tell you right now, I killed Reverend Daniel Glory. Back there at the church, in his study.

But this is my story. Don’t let anyone tell you different. My dad always said we all write our own story. Of course, I guess that’s why it worked out so well for him.

Why did I kill Reverend Daniel Glory? Sure, it was an accident. More or less. At least, I think it was.

I don’t know, we were arguing about the Rapture and it kind of got out of hand and then I just —

Wait. Wait. I’m getting ahead of myself. Let me back up.

This all started about three months ago, when Reverend Daniel Glory told us we needed to do our Tribulation House earlier than —

Okay, I guess this actually started last year when Marvin Dobbs left the church. Our church. The Last Church of God’s Imminent Will.

A year ago last summer, Marvin left with some of the other families to start a new church, and he took his Armageddon House” multimedia show with him.

You do know about Armageddon House, right? Every Halloween for the past three or four years, Marvin and our team put together a special multimedia presentation explaining the Great Tribulation, which ends with the Battle of Armageddon.

Wait — you don’t know about the Great Tribulation? It’s that seven-year period between the Rapture and the Triumphant Return of Jesus Christ, as described in the prophecies of Daniel and Ezekiel and the Apostles Paul and John. After the Lord Jesus takes His Bride home, there are going to be seven years of horrible judgment inflicted on those who are left b —

What? The murder of Reverend Glory? I’m getting to that.

Well, anyway, when Marvin left to form his little offshoot splinter group, we discovered he had actually trademarked the name “Armageddon House.” Imagine that.

When the board at church met to discuss the matter, we considered doing Armageddon House anyway without him. Just reconstruct it from memory and copy or use materials from previous years. Use the same name, business as usual. Just ignore the cease-and-desist letter, let God and His angels work that out.

But we decided we didn’t want to be associated with Armageddon House anymore. I mean, if Marvin and his new “fellowship” planned to stage their own Armageddon House, the risk of confusion in the marketplace was enough to rebuild ours as a brand-new event.

Which is how we ended up with Tribulation House. It was an opportunity for a new beginning. We went through a whole list of potential names — I came up with Kingdom Come, but was voted down — before we settled on Tribulation House.

We sat down and worked through the whole grid. Instead of imagining how to simply explain or show a picture of each bowl of wrath and each trumpet of judgment, we created an entire theatrical event.

Yeah, we could have set up the charts and graphs and the overhead projector. But today’s audience, this last generation, they’re kind of jaded about flannel graph presentations, know what I mean?

These kids today, with their Spongebob Squarepants and their American Bandstand and their Buffy The Vampire Slayer, they need the bells and whistles and the like.

The kids don’t need a lot of explanation. They need a demonstration.

You see, that was the challenge, wasn’t it? It’s one thing to say “the moon was blackened” or “the waters turned to blood” or “men were stung by enormous flying scorpions” — but how do you make it happen right here, right before their eyes?

In the end, we created Tribulation House: A full-sensory immersive interactive dramatic theatrical evangelistic event that simulates what it will actually be like to live through the events of the Great Tribulation. An entire full-service prophetic experience.

You’d be surprised how much of it we accomplished with sound and light. We developed the various rooms throughout the church basement. Some college kids created soundscapes for each event. We wrote up a full script for the actors; they played everything from people caught up in the events, to the world armies fighting the Most Holy, to the father of lies himself, bound and thrown into the pit for a millennium.

The murder of Reverend Daniel Glory? I’m getting to that.

So we were working out the blueprints for creating Tribulation House as a major theatrical evangelistic full-sensory ministry outreach. We had debated the merits of various slogans for the event — the leading contenders were WE’LL SCARE THE HELL OUT OF YOU; GET RIGHT OR GET LEFT; and THE TIME IS CLOSER THAN YOU THINK. While the first slogan was a favorite of several board members, for its bracing, truthful stance, in the end we worried that the neighbors would misunderstand. So we went with the second slogan, for its simple, instructional message.

And I remember that our chief carpenter, Bill Broadstreet, was giving us his estimate for the physical construction to be done on the project. Suddenly, Reverend Daniel Glory burst in with some news.

“Friends!” There was a glow on the Reverend’s face unlike we had seen before. The man stood there in the doorway to the church basement, leaning against the doorframe, wheezing to catch his breath. “Jesus is coming back!”

The room was silent. We all stared. At first, we wondered why he was saying this right then. After all, he preached on this topic every week. But then he dropped this bomb: “And I know when!”

Okay, that was a new one. Collectively, everyone in the room gasped. One of us, I don’t even remember who it was, asked, “When, Reverend?”

“5:51 a.m.” Reverend Daniel Glory waved the papers clutched in his hand. Later, I would wonder what he was waving at us. His Bible study? His calculations? All I know is he grinned ear to ear and said, “The Rapture is going to happen at 5:51 a.m. on October 17.”

Everyone around the meeting table reacted differently. Some were stunned into silence, others screamed with joy. One noisy woman loudly sobbed and clapped.

Reverend Daniel Glory came into room, face aglow with thrill and exhaustion, and dragged a chair from the wall over to our table. He sat, waiting until everyone was silent again. “I now have incontrovertible proof that the Rapture takes place this coming October.”

I’m sure I grinned bigger than anyone in the room. “What reason do you have to say that?”

Reverend Daniel Glory looked at me and winked. “Why stop with one reason, boy? I got one hundred and seven of ’em!”

Of course, you know what this meant. We were going to have to step up the production of Tribulation House.

Chris Wells laughoutloud Christian thrillers appeal to the millions of readers who gobble up the rollicking crime fiction of Janet Evanovich and Elmore Leonard. TRIBULATION HOUSE does not disappoint!

It Came in the Mail!
An Interesting Time at Office Max