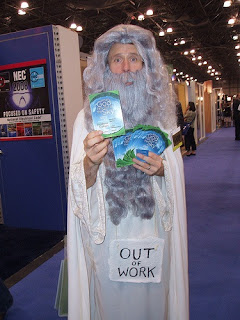 But he looked like this. Unemployed. Needy. With bad fashion sense and a terribly fake beard and pleading eyes. He handed me a postcard, told me to read a certain book.
.
It’s called When God Falls Out of the Sky: A Spiritual Handbook for an Evolving World, by Andrew Cohen. Enlightened readers can pick up a copy next Spring of 2008. The card invited me to meet the author with these words:
.
“With gourmet organic raw-food sweets and miracles performed by “God” (Gerard Senehi, one of the world’s leading mentalists.)”
.
First off, what is a mentalist? Anyone know?
.
Then, the postcard quoted the book:
.
“God is no longer ‘up there’ waiting to save us. Until very recently, that creative principle was something that we were asking for help from. But I believe we’ve reached a time in history when God, which I would describe as the energy and intelligence that created the universe, is now completely dependent on us–upon those sentient beings who have reached a level of development where we’re actually capable of beginning to appreciate who we are and why we are here in nothing less than a cosmic context.”
.
Well, then.
.
Poor God. He made His creatures, then those pesky earthlings went and evolved on him. Became bigger than Him, so much so that he’s helpless without them. Like a dog in need of a walk to relieve Himself, God waits for us to shake the leash, to take poor God outside.
.
I have about fifty responses to this, but I’ll leave that to you to leave comments. Lively comments, no doubt. But I will end with these words:
.
“For although they knew God, they neither glorified him as God nor gave thanks to him, but their thinking became futile and their foolish hearts were darkened. Although they claimed to be wise, they became fools and exchanged the glory of the immortal God for images made to look like mortal man and birds and animals and reptiles. Therefore God gave them over in the sinful desires of their hearts to sexual impurity for the degrading of their bodies with one another. They exchanged the truth of God for a lie, and worshiped and served created things rather than the Creator–who is forever praised. Amen” (Romans 1: 21-25).
A Great Place for North Texas Book Lovers!
Wordless (Wordful! Woeful!) Wednesday