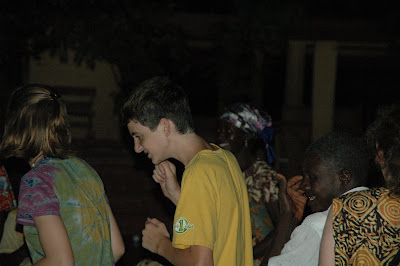 Aidan dancing with all his might in Tarikpaa. They named him the best dancer. 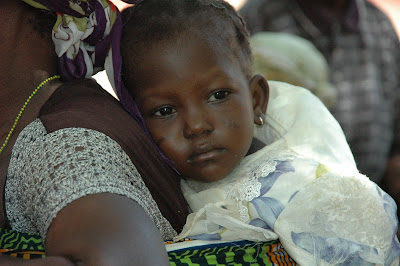 The little girl who’d been bitten by a snake and had been near death. 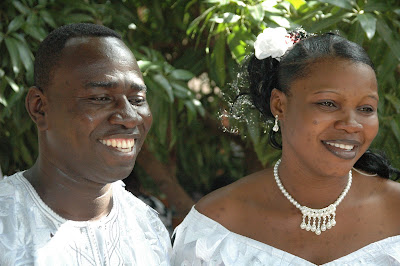 Paul and Cynthia on the day of the outdooring ceremony.
June 28, 2008. Mid afternoon.

As the rain steadily pelts the guest house, I am nearly nodding off from extreme fatigue. We’ve had a good day so far. The outdooring ceremony was lovely, with singing, a sermon about the importance of names, the giving of gifts and the revelation of baby-girl Napari’s name. Her name is Jessica.
We drove to a hospital where a small girl who had been bitten by a snake had been very, very ill earlier in the week. Part of the team visited her and prayed for her. Today, instead of a hospital bed, she was clinging to her mom, ready to go home. We took up an offering to pay for her medical bills.
We had lunch at a restaurant. I had fried rice; it was quite good. I also had a lemon Fanta which was delicious. Next, we go to Peggy and Pat’s home where Pastor Wuni and his wife Grace have prepared a Ghanian meal for us.
Today Paul had sandwiches made for us. I didn’t take one at first (being extremely conscious of my stomach), but I fear I hurt his feelings. We all took one once we saw his reaction. What a dear man to think of us and provide food for us.
Tonight we go to the Tarikpaa church for closing ceremonies. Aidan and I are both completely exhausted, but we will go. God always seems to come through with strength especially when we have none. We both have sores in our mouths and sore throats.
I’ll be singing tonight. It’s my prayer that the singing will bless folks and that they’ll see Jesus in me as I sing.

Aidan danced tonight with the Tarikpaa church. The village voted him the best dancer. He came back beaming. “This is the best day of my life,” he said. “I didn’t know I could dance.”

Seeing him unashamed blessed me, surprised me, humbled me.
The leaders brought forward a girl who had been bound by her father in motorcycle chains. He doesn’t like that she’s a Christian and he hurts her, captures her, and confines her by tying her up or wrapping her in chains. She tried to take poison to end her life, but it didn’t work. She was able to escape tonight and be in our meeting. We surrounded her, prayed for her, and wept alongside her. Under the cover of darkness, one of the pastors took her to a faraway village on his motorbike. Lord, please bring her to safety. Protect her. Guide her. Surround where she is with Your angels.
There really aren’t words to describe an experience like that.
Pastor Paul, on behalf of the Tarikpaa church, expressed his gratitude. “We do not have the whole world to give to you. We do not have much at all. But what we do have, we give to you.” They gave us certificates so we would remember what we did in the villages and we’d commit to pray for them throughout the year. They also gave the women beautiful Ghanian dresses and the men, shirts. We will wear them tomorrow when we go to the Koinonia church. Then we’re off in a very small airplane to Accra.
I am tired, feeling a bit sick, and need a lot of sleep. But I’m full of Jesus. Pastor Paul told me his story on our way back from Tarikpaa. An amazing story of God’s provision. “Often I have not known when my next meal would come from. It was times like that, I learned how to trust the Lord,” he told me. He grew up without a father and a distant, absent mother. He had nothing to rely on—no money, no immediate relations. Yet he was the first person from his village to graduate college. “I always want to be doing something for the Lord,” he said. “I always am trying to work hard for Him.” It’s all so humbling, I can barely write about it.
A 70s aside: Anyone have this doll?
Next Post