Following Lisa Samson’s lead, I’m reading excellent contemporary fiction this year. I’m calling the endeavor Truffle Books–reading the kind of book that makes a Hershey bar whine and sniffle in marked inferiority, the kind of book that dares you to pick it up and have just one taste until you’re irrevocably hooked. Just like Lindt dark chocolate truffles. 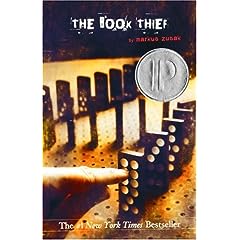 My first book? The Book Thief by Markus Zusak.
Review: Wow. Amazing. Buy it. Read it. Revel in it.
Zusak astounds me. His language is simple (In fact I was surprised at how much he used “was” and “were” in his prose, but it worked). But his metaphors are surprising and fresh. Zusak writes the book from the point of view of Death, which serves as an omniscient, intelligent POV. Death is truly its own character with quirks, observations, and fascinating asides inserted into the text.
Death follows the life of Liesel Meminger during World War II, a young girl nearly in love who has a thirst for thievery, her main object being books (thus, the title). During Hitler’s maniacal regime, we see the beauty of humanity in Liesel, but more particularly in the men in her life: Rudy, her sometimes partner in crime, Papa, the Jesusy father figure, and Max, the sensitive, beautiful Jew they hide. Aching prose. Excruciating drama. An excellent read.
Eye/Ear Candy: (This is where I shoot you a few amazing snippets of writing. For this book, I’d have to retype the entire thing. But here are a few to whet your literary appetite):

If you’ve read this book, ruminate about its greatness with me. If you haven’t, do so. It’s darkness and sunshine clashing.