It is JUNE 1st, time for the FIRST Day Blog Tour! (Join our alliance! Click the button!) The FIRST day of every month we will feature an author and his/her latest book’s FIRST chapter!

This month’s feature is:

Rebeca Seitz is Founder and President of Glass Road Public Relations. An author for several years, Rebeca cut her publicity teeth as the first dedicated publicist for the fiction division of Thomas Nelson Publishers. In 2005, Rebeca resigned from WestBow and opened the doors of GRPR, the only publicity firm of its kind in the country dedicated solely to representing novelists writing from a Christian worldview. Rebeca has worked with such esteemed authors as Robin Jones Gunn, Ted Dekker, Frank Peretti, Walter Wangerin, Jr., DiAnn Mills, Brandilyn Collins, Colleen Coble, Melody Carlson, and numerous others. She has secured coverage for novelists in a variety of media outlets, including The Today Show, USA Today, Chicago Sun-Times, Atlanta Journal-Constitution, Publishers Weekly, Christian Retailing, Aspiring Retail, Southern Living, Daystar Television, HarvestTV, WAY-FM, K-LOVE, and others. Rebeca makes her home in Kentucky with her husband, Charles, and their son, Anderson. 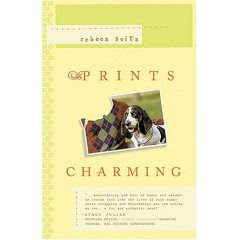 “Girl, where are you?” Lydia tightened her grip on the cell phone as she wondered anew how any woman could be late to every single thing in her life. She had thought Jane might’ve changed in the two years they’d been apart, but Jane was evidently still living up to her old high school nickname of Late Jane. The woman would get to her own funeral about an hour after they started the music.

“I’m coming, I’m coming.” Jane kept one hand on the steering wheel while frantically sifting through the things in the passenger seat of her Blazer. There was a brush somewhere, she just knew it, but finding anything at seven in the morning was difficult at best. Why in the world she’d allowed herself to be talked into attending a sale that started at seven a.m. was beyond her ability to fathom. Finding her shoes had been a reason for cheering. A brush might just be asking too much.

“Do I need to grab anything for you? This stuff is going fast.” Lydia watched a woman stretch for the last package of Times-style foam alphabet letters and readjusted her own heavy shopping basket. In the five minutes she’d been in the store, it had already begun biting into the skin on her arm.

“Nope, I don’t think so. I’ll be there in about two minutes,” Jane said, still searching for the brush while trying not to drop the cell phone from her shoulder.

“Okay, but hurry. I’ll be over in the baby girl section. I need to find something for Olivia’s first bath pages and get ribbon for Mac.”

Jane snapped the phone together and slammed to a stop at the red light. Turning her attention to her still searching hand, she finally grasped the elusive hairbrush and quickly raked it through her long black hair. She had been looking forward to this sale all week but, of course, Mr. Wonderful had chosen to make his appearance a mere thirty minutes before she walked out the door. They had fought over Wilson. Again. When would the man get it through his head that Wilson was in her life forever?

She pushed thoughts of her soon-to-be ex-husband out of her mind as the green arrow finally appeared. Squealing her tires, she tore into the parking lot of The Savvy Scrapper. Tossing the hairbrush back into the passenger seat, she threw the car into Park, grabbed her purse, and flung open the door.

Jane looked up just as her door collided with the midsection of one very tall man.

“Ohmigosh. I am so, so sorry. I’m just in a rush. The sale is happening and I’m late and—”

“It’s okay.”
Mr. Tall held his hands up as if to ward off any other car doors she might be hiding somewhere and she noticed the coffee cup in one hand and bagel bag in the other. Bagels would be so heavenly right now.

“I’m fine, really.” He set the bag down on the ground and brushed the dust off of his olive-green sweater, then looked at her. “I know how women can be when there’s a sale involved.” He grinned as he knelt to pick the bag back up.

She tried hard to ignore his sexist statement and not remind him of how many guys camp out at golf stores before a sale or sleep in the parking lot to get tickets to a concert.

“Are you sure you’re okay? I mean, I have insurance and we can call somebody.” Jane forcefully tucked her hair behind her ears, willing herself to focus on the problem at hand rather than the sale happening about ten yards away or the way her stomach was now grumbling for coffee and a bagel.

“Okay, thanks.” She turned and made her way around the back of the car. “Really, I appreciate this. It’s just that this only happens once a year and my friend is waiting . . .” She stopped on the far side of the car and looked at him. He could sue if he was really hurt and her luck with men right now meant he would definitely sue and she would surely lose. “You’re absolutely fine?”

“Go.” He made a shooing motion with the bag. “Happy shopping.”

Her mother always said to never look a gift horse in the mouth and this was one time Jane would be obeying Elizabeth rather than giving in to her own desire to argue. She practically sprinted to the front door of The Savvy Scrapper, yanked it open, and burst inside.

“Jane!” Lydia was in the front corner of the store, surrounded by pink, yellow, blue, lilac, and pale green. She waved a die-cut of a bathtub and bubbles above her head. “I found the perfect stuff for Olivia and Oliver’s First Bath page.”

“Okay, here’s the deal.” Lydia turned toward the back of the store and pointed. “All the Times letters are gone, the vellum is quickly going, and the dog section is getting riffled through as we speak. Where do you want to start?”

“Dog section, definitely.” Jane stuffed her keys into her purse. “I took great pictures of the ex this morning picking up Wilson’s poop while stepping in another pile.”

“You are so gross. What was he doing there?”

“Trying to get me to give him Wilson again.” Jane scanned the rest of the store, making a quick plan to get the most stuff. “He’ll get the picture one day, just not today. He’s insane if he thinks I’m letting my puppy come live with him while he’s spending all hours online with his e-mistress.”

“Okay, that still sounds so weird.” Lydia’s eyebrows rose as she gave Jane a disbelieving look. “E-mistress? Really? That’s what we’re calling her?”

“E-mistress is the only thing I could think of that’s fit for public consumption.” Jane grimaced. “Anyway, forget her and him. I’m here to shop, honey.”

“Right. Go on over to the dog section. I’ll come over there when I’m finished here. Can you grab me that new paper with the red stripes and dark-brown bones? I’ve got some pictures of Otis with Olivia and Oliver from last week.”

“Dale let that pug get near his precious twins? I thought you said the only thing he cared more about than SportsCenter was those babies.”

“Dale hasn’t seen the pictures yet. He never comes in my scrapbook studio. Says it’s my workspace and that I spend too much money on all this junk as it is.” Lydia waved her hand to encompass the store. “He’s probably right.”

“Oh, please. Men are never right,” Jane said and turned toward the dog section. “Dogs, on the other hand, are absolutely wonderful companions who never cheat and can’t even turn a computer on.”

Lydia laughed and turned back to the wall of baby-themed paper in front of her, leaving Jane to take care of the dog paper. Stripes or flowers? She didn’t want to make the scrapbook too babyish, but she also didn’t want it to look too grownup. The papers were all on sale, so maybe she would just get both. Dale would never know since he didn’t come into her studio anyway, and she could give some of it to Mac for Kesa’s baby book. She took two sheets of the pink-and-lime-green-striped paper, then two of the blue rosebud ones.

“Men are never right,” she muttered under her breath. Maybe Jane had a good point.