I don’t know what it is about girls. Or women. But we’re a catty lot. Something icky starts happening around third grade when girls say such nice things as, “You’re not my best friend anymore.” Or “You can’t come to my party.” Then we grow in more sophistication with our words, but the malice beneath the surface says the same thing.

So far, on my sojourn on earth, I haven’t encountered many personal male enemies or nemesis. Maybe it’s because I don’t interact deeply with men who aren’t my hubby, or maybe it has something to do with the male psyche. Hard to say.

But as I read these verses today, several flashbacks assaulted me:

“My enemies say of me in malice, ‘When will he die, and his name perish?’ And when one comes to see me, he utters empty words, while his heart gathers iniquity; when he goes out, he tells it abroad. All who hate me whisper together about me; they imagine the worst for me” (Psalm 41:5,6, ESV).

It’s that last part that gets me. They imagine the worst for me.

I remember some of my deepest girl wounds over the years, and every one of them involves this assumption of negative intent. The first memory I have of this is when I was in the first grade. I’d been kept in for recess to finish something. I can’t remember what. I finished quickly, then thought, “Well, I’m here, I may as well help.” So I erased the chalkboards really carefully, using those special erasers that make it really shine. I pulled one vertically then horizontally.

I smiled in my seat when the teacher came back in, awaiting her smile. I loved my teacher. Instead, she recoiled, aimed angry eyes my way and yelled at me. “How dare you erase my chalkboards without permission. How could you do such a bad thing?”

I shrunk, as you can imagine. I tried to tell her I thought I was helping, that I did it with pure motive, but she would hear nothing of it.

It’s that kind of thing I’m talking about. When someone assigns a bad motive to me when, in actuality, a good motive is there. There’s nothing worse than that. In those moments, when scolded, I become that little girl, cowering.

It’s happened several times in adulthood. Angry women saying things about me that aren’t true. (This does not mean I don’t do or say or think naughty things. Of course that happens. And my dear, close friends are bold and loving enough to confront me. It’s not that kind of thing I’m talking about here.) It’s when girl enemies decide something about me, then forever assign whichever motives they want to me. And there’s simply nothing I can do to change that.

Our pastor gave a great illustration at church that really helped me. The four quadrants of conflict. Here it is: 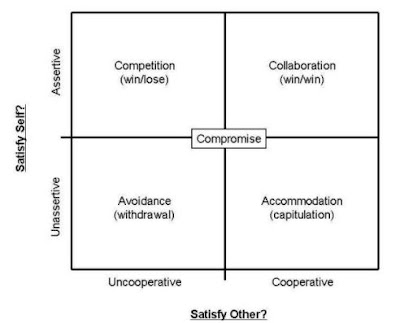 I almost always fell into the capitulation category, where I’m nearly always trying to satisfy the other. So many times I’ve taken in someone’s petty words like a delicacy, feeding on them, digesting them. And then I’ll say something like, “Oh, you’re right. I was that way.”

But that certainly doesn’t help. It doesn’t help the person who assumed ill intent (because I’m validating unreality), and it numbs me.

I suppose the inevitability of girl enemies is something I should expect, but in that expectation, I need to grow up a bit. Let go of words that aren’t true, take to heart the ones that are, and let Jesus sift it all through. And build into the dear women in my life who speak the truth in love, who listen to me when I’m weak and needy, who don’t assume the worst about me, who pray for me and give me the privilege of the same.

I doubt we’ll solve the girl enemy issue. It’s wrapped up in envy and insecurity and the like. But we can change the way we respond. To hear, then give it to Jesus, the One who bore the worst assumptions of others in every way.

What is life? Lord, hear my prayer
The Hole in Our Gospel by Richard Stearns