You are here: Home › Blog › Christian Book Expo: The Lowdown 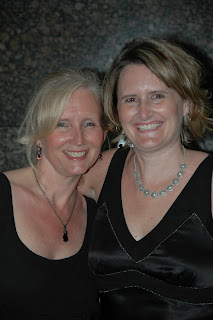 Susan Meissner and I at the Christian Book Awards banquet 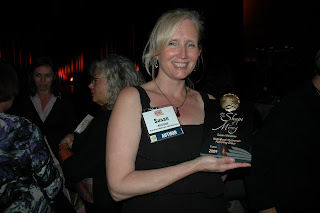 She won! The Christian Book Award for fiction (for The Shape of Mercy) 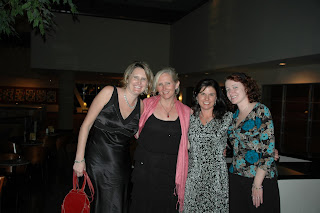 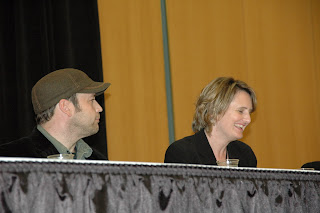 On the Christianity Today panel. 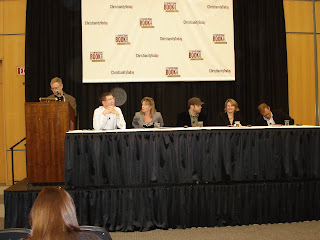 The Christianity Today panel: Stan Guthrie (standing), Andy Crouch, Ruth Haley Barton, Donald Miller, Me, Randy Frazee.
The good: The Christian Book Expo was well-planned, well-staffed, and provided a lot of amazing opportunities to hear and meet authors and speakers. The signage, programs, and staff were professional and helpful. I was particularly impressed by Christianity Today’s involvement in staffing some amazing discussion panels and raising important issues. I thoroughly enjoyed my time on our panel, Living Christianly in a Post Christian Culture. This will be aired on Tangle.com eventually, and I’ll share that link in case you’re interested in seeing it.

I was a bit nervous, though. I felt a bit like I didn’t belong among these amazing, accomplished speakers and writers. But as I sat down, the Lord said, “Mary, I’m going to speak through you. Relax. Trust.” So I relaxed. And trusted. I was amazed at how beautifully I connected with the audience (to God be the glory). I had several people come up to me afterwards, and then more emailed later. I’m thankful that my words had impact. Tomorrow I’ll post what I said on Relevant Blog.

The Christian Book Award ceremony, sponsored by the ECPA, was elegant and fun, particularly since I had the privilege of cheering for my friend Susan Meissner who WON! The evening did run long because actors/actresses read about each book (and that could’ve been shortened). But all in all, good food, great company, and a well-run show. One thing that did startle me at least seven times was the announcer’s voice. It came over the PA system at different times, and the voice sounded like God. Scared me a bit.

The bad: I ached for the folks who put the CBE together–so much sweat and toil to see so few come. It was hard for me to enjoy myself knowing that the event failed to live up to expectations. I know publishers and the ECPA must’ve lost money. I know I did. (Though I live in the Dallas area, we stayed in a hotel to avoid traffic.) Instead of a projected crowd of 10,000 people, we probably had 2,000 or less. As a local, I had a haunting feeling that few would show up. Why?

The godly: I had some really cool divine appointments. I had the privilege of praying for several people over the course of a few days. One lady I prayed for had a special needs child (something I don’t have much in common with). But I felt led to pray for her. Afterwards another lady approached her, said, “I am sorry I overheard, but I wanted to encourage you.” She had a special needs child who is now an adult, and she was able to encourage and minister to this frazzled mom.

I met a few bookstore owners, which was wonderful. I had great conversations with several people. I had significant conversations with my agent and several of my close writing friends. And I heard some really cool things from folks that made me want to keep writing. (Sometimes you just need encouragement. Hearing that people continue to think about the characters in Daisy Chain long after they’ve shut the book warmed the cockles of my writerly heart.) And hanging out all weekend with Susan has been so much fun.

What I think: I believe this show should continue with some tweaking. My recommendations:

I really hope we can do this event next year, and I truly believe it can be wildly successful on every level. I’m willing to do my part. So even if the event (which was well executed) wasn’t successful in terms of attendance and participation, I believe it has merit.