Apparently the link to The Master’s Artist is wonky. I’ll go ahead and paste the article I wrote there below. 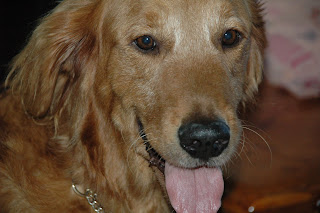 I had a frustrating run on Monday. I psyched myself up to do over three miles, grabbed the leash for my golden retriever Pippin, and took off running. This is a big deal for wimpy me, who seems to have a problem getting past the three mile marker. Just as I was huffing big time, another dog darted into our path. He was a happy, friendly dog, and didn’t (thankfully) growl or bite Pippin. He simply ran ahead of us keeping the pace.

Unfortunately, he was a bit nutty in the head . . .

He decided the entire street was his oyster, running out in the middle of the street, nearly getting himself killed at least three times. (Motorists looked at ME in anger, as if the dog was mine! I kept shaking my head, as if that would communicate the entire story of the stray, random dog).

I thought about that darting dog as I ran, hoping he didn’t get killed, yelling at him to go home, even whacking him on the behind with my hand. But he wouldn’t listen. He was too frivolously happy to run from bush to bush, across the street each time, marinating the plants with his unique scent.

And then it hit me. My life of late has been a lot like that dog’s. I’m running here and there chasing money, and it’s getting my soul into trouble. It’s not that I’m greedily scheming to make a cool million or anything. It’s that I’m worrying so much about trying to make money as a writer that I’m distracted. Instead of plodding faithfully along toward home, like my sweet dog Pippin, I’m erratic, darting this way and that, hoping a job comes in.

It reminds me a lot of raising support when we went to France (and now as we’re raising support to go to Ghana). We’d frenetically flit here and there, working our tails off (pun intended). We’d check our support levels, only to find out that nothing had moved. We’d give up, throw our hands in the air, and during a week of complete inactivity in the support raising department, we’d find more money in our missionary account. There’s something to working hard, yes. But there’s also something deliciously mysterious about resting in God’s providence and seeing Him do the impossible.

It’s taken me some time to realize I’m no stray dog. That I belong to the King of kings and Lord of lords. I don’t need to run crazy, dashing to each money making possibility. I simply need to plod along under the Master’s hand, making my way toward Home. Money (or the lack thereof) has made me question my calling, folks. Though I know God has called me to write, and He has gifted me to do so, this last year I’ve wondered if I should chuck it all and get a job that pays steadily. I’ve worked like a dog, only to have very little remuneration. It’s been discouraging.

So I ran around like a wayward dog, trying to make this gig lucrative enough to help pay our bills. I’m letting that pursuit go right now, a bit terrified. It’s the great letting go we did as we raised support, that step into the void that only God can fill. I guess that’s called faith, isn’t it? To walk forward, believing the path will materialize before your hesitant feet.

I’m Pippin today, listening to my Master, trusting He knows what is best, letting the wayward dog have his own way while I make my way Home.

In Praise of Seed Packets and Fresh Earth
New Book I contributed to: I’m Glad I’m a Mom